The Smart Commute trip planner can show you the most convenient transit options for your daily trips to campus all in one place.

We recommend you review each transit provider's COVID-19 service announcements while planning your trip. 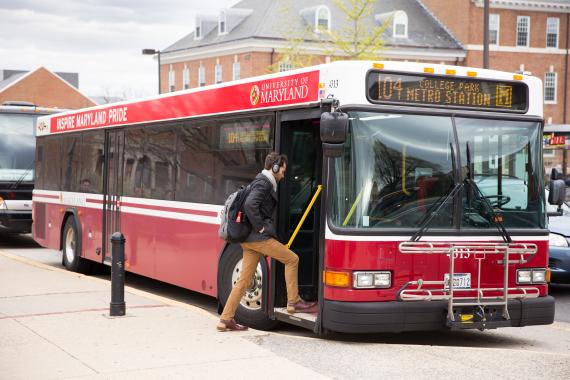 The Department of Transportation Services runs one of the nation’s largest university transit services with 19 fixed routes that traverse campus and the surrounding neighborhoods. Shuttle service is based on the academic calendar with reduced service when classes are not in session. View our schedules and routes before planning your next commute.

The Washington Metropolitan Area Transit Authority (WMATA) operates the regional MetroRail and MetroBus transit systems to connect students to the region for internships, work, fun and enrichment. Students can take the Shuttle-UM 104 to the College Park Metro Station and from there, it’s a quick ride to Downtown Washington, D.C. and Reagan National Airport. During the week, students can also take the Shuttle-UM 111 Silver Spring to the Silver Spring Metro station or the Shuttle-UM 126 New Carrollton to the New Carrollton Metro station. Learn more about Metro schedules and trip planning at wmata.com.

In addition to the MetroRail system, WMATA also operates a number of MetroBuses in the area. Routes that run near and through campus include:

The MARC’s Camden Line connects Baltimore (Camden Station) to Washington, DC (Union Station) via the College Park Metro Station. There is no weekend service on this line.