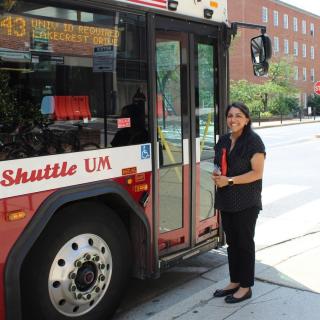 Kishwar Kabiruddin, a Program Coordinator for the Bioengineering Department, moved to Maryland from Texas where driving alone was her main commute option. Now she lives in Silver Spring and enjoys access to multiple public transit systems. When the chance came to take transit to campus and leave her car behind, she jumped at the opportunity. Though the ride might be longer, her quality of life has improved and she makes better use of her commute time.

From where do you commute, and what was your commute like before you started taking transit?

I used to drive to campus from Silver Spring and it usually took about 20 to 30 minutes depending on traffic. If there was traffic, I would be miserable when I got to work. Now, I take the 111 Silver Spring Shuttle-UM bus most of the time. I also take the WMATA Metro in when the buses are running on reduced schedules. When I take transit, it usually takes anywhere from 40 to 45 minutes depending on whether I take the bus or the Metro.

Did you have any concerns about starting a transit commute?

No. I've only ever lived in Texas, and we drive everywhere there. I've never really known any place where you can walk out your front door and walk to go grocery shopping, or take the Metro or a bus. I like that I can do this here, so I didn’t have any reservations to begin with.

Why did you decide to take transit over other sustainable methods?

I chose transit because the Shuttle-UM bus is cost-effective. I get on at the first stop, so I always have a seat. I use the Metro during Shuttle-UM’s reduced service times because it picks up in the same place where I would catch the bus. I'm new to this whole transit thing, so taking the Metro feels hip!

What kind of considerations did you think about when you decided to start taking transit?

First, I thought about how much would it cost: is it cheaper to take transit than to park on campus? Second, I looked to see how close I would be to the metro or Shuttle-UM route. Third, and I think the biggest consideration, was the weather. I was warned by people who have been in Maryland longer that when it comes to the winter months, I’ll want to be careful of the snow and the cold.

I do have to think about the weather, but, honestly, it’s not that bad. I bought snow boots that work well in the rain and I keep an extra pair of shoes in the office. I change into them when I get to work.

The Parking Cash Out program was a huge incentive since I thought “I'm going to get money for helping out the environment and bettering my life by doing what I like.” Those were all the biggest things I considered before switching.

How has commute experience changed since you started taking transit?

I don’t have to worry about paying attention to traffic. I'm more relaxed. I arrive at the bus stop a little early and in take the extra time before my bus arrives to walk around. I'm getting more exercise and I'm catching up on TV shows on my phone while on the bus. I also feel like I'm also more informed about the world because I pick up the newspaper on the Metro every morning. I talk to my friends more often on the phone, too. Although my commute is longer, it feels like a better use of my time. I'm more relaxed. I'm just happier. So, I really enjoy it—I honestly do.

What kind of advice would you give someone who is unsure about switching their commute from driving to transit?

Don't be afraid—just go for it. If you do it for two weeks and hate it, you can go back, it’s not like you have to turn in your parking permit. While you think it might be crazy or difficult, you might be surprised.

What about people who are worried about what they'll do in an emergency?

That happened to me once or twice last year. There’s a service called Guaranteed Ride Home, and they give you four free rides home during the year. You call them, let them know there is an emergency and that you take transit, and they pick you up. I used that once because my husband wasn’t feeling well. Other than that, I think I've used Lyft and Uber when I've stayed late for an event and either the shuttle isn’t running or I don’t want to use the Metro. Those options are there and I don’t think there are many times when I've needed my car. I also have co-workers who are willing to give me a ride home when I need it.

What surprised you the most about the switch?

How easy it was to learn and get into a routine. I was so used to driving. So I was thinking, "This is totally different, I've never experienced it. Will my life change, will it be difficult to do?" And honestly, it's pretty easy. You learn the routes, you know where to get on the bus and where to get off. That's what surprised me the most, how easy it was to do. It’s also convenient.

Just try it. It's so easy, it’s so convenient and I would not go back to driving. You guys have converted me, and I love it.