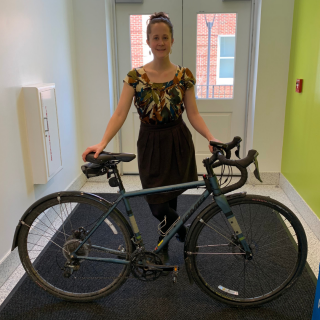 Cate Barger hated traffic. Though her drive from Mt. Rainier was only about six miles, the traffic on Adelphi Road and Queen’s Chapel Road made her commute feel much longer. Biking to work had always appealed to her and in August 2018, Cate got the jumpstart she needed to switch to biking full time—burning 56,400 calories and saving more than $1,500 in the process! Read on to find out how easy it was for her to change her commute.

Cate Barger is the Operations Manager for the Edward St. John Learning and Teaching Center.

What made you switch to biking?

It's been something I've wanted to do for years. I've worked at the university for almost six years in different departments. When I was in the School of Theatre, Dance, and Performance Studies (TDPS), I worked a lot of late nights and I didn’t want to bike home at 11 o’clock or midnight. So I’d only bike occasionally, keeping my bike in my office and using the dance studio showers.

Then, a couple years ago, I moved to the Division of IT and my hours were better, but I didn't have easy access to shower facilities—showers weren’t at Regents Drive Garage yet. So, I didn’t start biking again until I came to Edward St. John. Then, I biked occasionally because there’s a shower in the building and I can keep my bike in my office. What really got me biking regularly was DOTS’ Parking Cash-Out program. I got the email about it and said to myself, “Alright, let’s do it. They’re gonna pay me.” That really kicked me in the butt and since I had to drop my parking pass, I had to do it every day.

What kinds of considerations did you take into account when you started? Did you have any concerns?

I talked to my supervisors about starting to bike regularly because it meant I needed more flexibility in my schedule based on things like sunlight and weather. I adjusted my hours, so when the sun is up earlier, I get here earlier and when it goes down earlier, I leave early and do a little work from home. Taking the weather into consideration was important too, knowing how I’d get to work if it was raining or snowing. So far, I've actually been biking through it all and it hasn’t been too bad.

Gear was something else I thought about. For the past few years, I've been biking on my Craigslist $150 mountain bike. It was totally fine, it’s only six miles and I got a workout because the ride is a little bit harder on a mountain bike. When I decided I was going to bike every day, I also decided to purchase a new bike. I ultimately purchased a bike better suited for long distance riding with a lot of help from Proteus bike shop. They helped me try bikes until I found one I liked. They have a great community there with group rides on Saturdays and classes on biking and maintenance.

I think something a little overwhelming about switching to biking is that there is so much gear that you could buy and it's all really expensive. You don’t need to buy all the bells and whistles. I bought a balaclava, some gloves and thermal wear that I use when it gets cold for maybe 50 bucks at Costco. I also bought some bike lights for when I bike at night. Most of the stuff I'm wearing, though, I already had at the house -- some hand-me-downs from my husband and the helmet. You don't have to go all out to achieve this goal.

How has your commute experience changed since you started biking?

It's so much better. I used to hate driving and it's not even very far, but traffic on Queens Chapel and Adelphi is always terrible. I also parked over in Lot J, which is almost a 10 minute walk from my office. I can do the bike ride in just about half an hour, so it’s almost a wash time-wise. It's so much more relaxing, too. There's two places where I cross roads on my commute, and I love going by the traffic that's all backed up, now that I don’t have to deal with it! I also get two bouts of exercise every day, no matter what.

What advice would you give to someone who is considering a bike commute?

Just start doing it. Give it a shot with whatever you have right now—whatever gear, whatever bike. Do it once a week or whenever you want and see how it goes. I'm in a really lucky situation where I don't have an incredibly far commute—on a bike path I can ride 97 percent of the way. There's a shower in my building and I can fit my bike in my office. Those are the logistics you have to think about though, what route to take, where to store your bike.

Don't be afraid of the weather. Some of my favorite rides are in the snow while it's still snowing. You feel really cool and it's actually not that bad. The first time it snowed and I geared up, I put on ALL the layers. I actually stopped halfway here and took off clothes because I was too warm. You'd be surprised how little clothing you need to stay warm while you’re moving. When it was 7 degrees outside I biked to work. I whipped out a pair of ski goggles from storage that I wore in high school and used them. I probably look so silly out there but I'm covered and warm.

What surprised you most about your new commute?

Deer! There are deer everywhere. The Northwest Branch trail goes through a lot of woods and parks. During rutting season in the fall, I can see 30 deer in the morning—they’re not shy. That was not something I ever considered when thinking about biking.

There is a really great community in DC of bikers. There are Facebook groups you can join where they just give advice, talk about gear and bikes, and  the best way to get anywhere. It's just a nice support system for people who are considering starting to bike or already bike. There are lots of resources out there.

How did you decide the route you would use to bike to work?

The first time, I Google-mapped the best route. Then on a Saturday my husband and I got our bikes and rode it together. We figured out the path so I was comfortable and then went from there. Now I've got it figured out and have several different routes I use based on the time of day or if I'm running an errand, which I don't do a lot. One of the big things that's been challenging is having to change my errand routine, as there is no stopping by the grocery store on the way home. I have been able to drop off dry cleaning, that's sort of the only errand I've figured out so far on the bike.

Why did you choose biking as your method of sustainable transportation as opposed to other options?

Biking is what I've been wanting to do. I love being outside and it's great exercise. There isn’t a metro stop where I live in Mt. Rainier, so I would have to bus. The bus goes up Route 1 and I’d walk over from Ritchie Coliseum, but that takes just as long if not longer than biking, so it was just the best of all the worlds. Luckily, we live in a climate where we're not having really cold, snowy winters, which makes biking a really great option. The university also has a lot of incentives, including a great bike repair shop. I actually got in one morning and I could hear this hissing noise as the air left my tire. I haven’t become proficient yet in repairing my tube so I hiked it up the hill to the repair shop and a student mechanic helped me fix it. I was able to ride it home that night.

Do you have any backup plans if something happens and you can’t bike home?

It hasn’t come up yet. I do have friends on campus I could hitch a ride from or my husband could come get me. And there are resources on campus if I do get stuck, like the Guaranteed Ride Home program. I could call them and they could get me home if I really needed to.

I definitely don’t bike as a lifestyle. I'm not the kind of person who's going to do all of my transportation biking and that’s OK. Biking isn’t my life, it's just how I get to work. When you go down this sort of biking rabbit-hole, you find people who are so into it, which is awesome, but you don't have to be just to bike to work half an hour every day.

Tired of sitting in rush hour traffic? We can help you rethink your ride. Learn about our sustainable transportation program, Smart Commute. Signing up is free, and it only takes a moment.