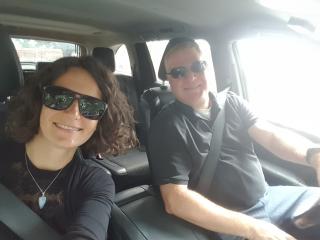 Sustainability has always been near and dear to Allison Tjaden’s heart, especially while working on sustainability programs with Dining Services. So when the opportunity arose to switch up her commute, she decided to practice what she preached and start carpooling. Read on to learn how and why Allison rethought her ride.

Where do you commute from and what was your commute like before you started carpooling?

I live north of Olney in Laytonsville, Maryland, so north Montgomery County. The drive to UMD is something like an hour depending on the traffic, but it’s never the 45 minutes the GPS says on a normal day. I moved to Laytonsville just about a year ago and one of the really exciting things about the move was deciding how I could, potentially, find alternative ways of getting to work. Before Laytonsville, we lived in Annapolis, which is a similar hour long commute. I had to drive on my own quite a bit, although occasionally I would commute with a couple other colleagues. When you feel the tension building because you’re driving alone, you think, “this is not me.” It’s not good to bring that tension to work or home. Having an audiobook or another person to help you zone out from the traffic makes the drive go a lot faster. So, even though I was keeping the same drive time, I knew I wanted to find a way to get to work that wasn’t driving alone. It became part of our move planning to consider alternate commuting methods. I was one of the first people to sign up for the Parking Cash Out program right as I moved.

Why carpooling as opposed to other methods of sustainable transportation?

One of the nice things about moving to Laytonsville, was that I had a colleague, Dan Ray, who lived in the area and was interested in carpooling together. He is actually the one who introduced us to the area. So carpooling made the most sense for me as a starting point for a sustainable commute. There are backups, like the shuttle from the Gaithersburg Park and Ride or the Shady Grove Metro. It probably takes me about 20 minutes to drive to either a metro or to the Park and Ride. While those are great back-ups, Dan and I meet at the elementary school down the road.

What considerations did you think about when you decided to make your switch?

The biggest thing that made a difference for me was trying to make sure I have a more consistent schedule, both coming and going from campus. The coming to campus is the easier part, but sometimes it can be a bit of a challenge in the afternoon, where I was accustomed to being on my own time. Scheduling was one of the biggest considerations. I had to make sure I could be consistent and not run late. For people who know me, I’m notoriously late for things, and I don’t want to be that person with my carpool buddy. That was my biggest struggle.

How did you find your buddy and how do you manage the conflicting schedules that you might run into?

Dan and I have known each other since I started in my position and we work on a lot of sustainability projects together, so we already knew each other going into it. When I moved to the area and shared I was looking to carpool, it was a natural fit. Our schedules have a lot of parallels and we both have some flexibility day-to-day for when we come and go. We check in with each other each day to confirm that the schedule is staying the same. Usually, we just have open conversations about that, and if there are occasions when it just isn’t going to work, then I either take another mode of sustainable transportation -- I mentioned the Metro or that awesome shuttle from Gaithersburg.  Sometimes we have to drive separately, but that is probably the exception.

Did you have any concerns about starting to carpool?

I was concerned about making sure the schedule works and that it’s not a burden on my carpool partner. Everyone is juggling a lot at work and home, so you don’t want to be throwing another wrench in somebody’s morning. I have a four-month-old at home, so my mornings can be a little bit hectic. Especially coming back after maternity leave, I was a little bit nervous about how to make sure I left the house at the right time. But, a lot of times those concerns are bigger in your mind than they are in practice. Just have open communication—we text if there is something and we’re running late. Our schedules are both flexible enough that 98 percent of the time we can work with each other’s little 10- or 15-minute bumps.

And since there are alternate ways for me to get to campus, I can always adjust. Having backups made me feel a lot more comfortable in switching, since I know I have other ways of getting to work if I need to. Having backups and open communication alleviate the major concerns. The fun benefits outweigh concerns about not wanting to inconvenience anybody.

How has your commute experience changed since you started carpooling?

Carpooling means I get to spend a little bit of extra time with a colleague to catch up about stuff that’s happening at work, things you maybe don’t want to bring home and talk about with your family; you have time to rehash the day and get input and advice. My carpool buddy also introduces me to a lot of music, which is fun. We listen to music, podcasts, and when his kids rode with us for camp, we even listened to some audiobooks. And I think I make a pretty good co-pilot, looking up the maps to decide if we’re going to take which way or what to avoid traffic.

What advice would you give someone who is considering switching their commute.

Map out all of the alternatives you have available and keep all of those alternatives open so you don’t feel pressured or stressed about the commute. You may assume you live too far from any sustainable options, but it’s often actually easier than you’d think. I live in Agricultural Reserve, a 20 minute drive to the closest Metro stop, but I can still use it to get to work. My commute by car alone takes an hour, but driving to and then using the Metro takes the same amount of time.

You have to keep an open mind and know that it isn’t going to look the same as what you are accustomed to. Some options might not work as well as others, I’ve had some crummy experiences trying to take the metro, carrying lots of bags, missing a train. But then you try it again, and it works. Talking to colleagues who might live nearby to see how they get to work is another way to explore options. It’s really through that casual conversation that we were able to find our carpool.

What surprised you most about your new commute?

How much different 90s music there is? Just kidding, Dan! We definitely listen to a lot of cool music that I didn’t know about, which is fun. What has been nice is that, especially on this new commute, Dan has been pretty experienced driving from our area to campus so he knows all the sneaky shortcuts. It also surprised me how easy it is to carpool. You just text, “Hey, on for the same time?” then “Yup”, “Great.” It takes two seconds. I think it was a psychological barrier and in practice it’s a lot easier than you might think.

How do you split up the driving?

Dan drives. He's driven to campus as a solo driver for several years, so he's going to be driving regardless. I'm hitching a ride with him, really. I'm always open to driving, but some people like to drive and I like to ride, so it works out really well for us.

It’s fun to interact with a colleague in a different, more personal way. I know that we have become much closer friends as a result of carpooling, getting to know each other’s families. Building more of a friendship with someone you work with is one of the best benefits of carpooling.